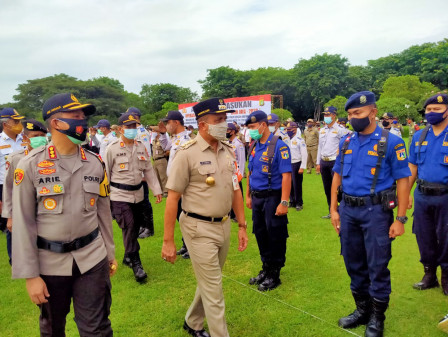 As many as 1,500 joint officers held a joint rally at the Purna Bakti Pertiwi TMII Museum yard, East Jakarta, Monday (21/2). It was directly led by the East Jakarta Mayor Muhammad Anwar in order to secure the forthcoming Christmas and New Year celebrations.

" To all officers I ask to prepare mentally and physically"

The mayor was about to involve joint personnel of Satpol PP, Transportation Sub-agency, Fire and Rescue Sub-agency, police and army, as well as other related units to secure a number of locations in East Jakarta, such as churches, terminals, s tations, shopping centers, as well as toll entry and exit access.

"To all officers I ask to prepare mentally and physically. Protect your health and increase sensitivity and alertness," he stated.

He hoped that it could create a sense of security and comfort in the community.

East Jakarta Metro Resort Police Chief Com. Pol. Arie Ardian Rishadi added, 1,500 joint personnel would be on duty from Monday (12/21) to January 4. They were assigned to conduct extra tight security for 209 churches in 10 sub-districts that will hold Christmas mass worship activities, beyond security in a number of other locations.

He added this year's priority for security was monitoring the implementation of health protocols to contain the spread of COVID-19.

"The number of church congregations who attend shouldn't be more than 50 percent of the building capacity. No additional tents," he stated.