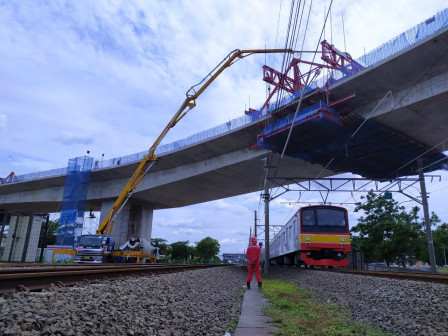 "As of today, physical progress reaches 94 percent, work plan 90 percent, so there is positive deviation of four percent," he mentioned, Monday (12/14).

He explained, girder work was done using traveller cast in situ method, as the same as working method used on LRT that crossing inner city toll road at Mampang-Kuningan intersection.

"At the same time, on the field we are working on restoring conditions, arranging area under flyover, and working on flyover oprit to the north," he said.

Moreover, Cakung Flyover is expected to reduce congestion caused by railroad crossings and minimize accidents. Because congestion often occurs in the area, especially in the morning and evening, where there are many vehicles and busy train schedule.

"Railway crossing will be closed later thus road users will be directed to go through flyover. Cakung Flyover construction is targeted to finish by the end of this year and can be used by public in January 2021," he informed.