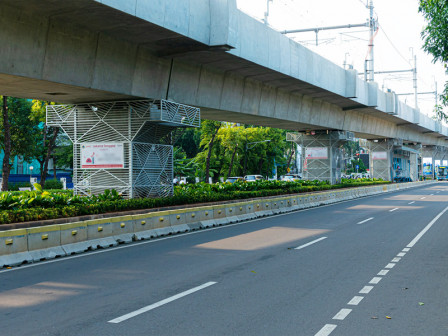 The COVID-19 pandemic has affected various economy sectors, one of which is public transportation sector.

Daily number of MRT Jakarta users in January and February 2020 reached around 88 thousand people and the scale is up to the target of 100 thousand people a day. However, from beginning of March to May, it decreased drastically. Early June began to move up. But, as of December 8, 2020, average number of MRT Jakarta users reached 27,901 people a day. From business perspective, revenue from ticket purchasing didn't meet expectation. PT. MRT Jakarta (Perseroda) took the initiative to develop non-ticket revenue, such as advertising.

"We are utilizing elevated station pillars along Jakarta MRT corridor by installing LEDs and LCDs. In the first year, there are 438 neonbox pillars and 50 LED pillars," said William Sabandar, President Director of PT. MRT Jakarta (Perseroda) in a written statement received by Beritajakarta.id, on Monday (12/14).

According to him, his side also reached out to digital business through cooperation with startup companies and young people which engaged in digital economy and digital program development by launching MRTJ Accel and MRTJ Star Track Incubation programs several months ago.

Since operating, PT. MRT Jakarta (Perseroda) has received income from various non-ticket sectors besides advertising, such as retail, telecommunication, naming rights, and transit-oriented area development. Despite being affected by the pandemic, in 2020, MRT has collected revenue around Rp 370 billion from non-ticket sector, which is better than last year.

"We are assisted by non-fare box revenue approach," he added.

His side stated that company's condition is still positive, including cash flow, thus no reduction in employees. MRT service is also great.

"Even the result of customer satisfaction index stated that the figure reached 86 percent. It is better than last year that reached 82 percent. It means passengers are still very satisfied in using MRT Jakarta even in the pandemic situation," he conveyed.