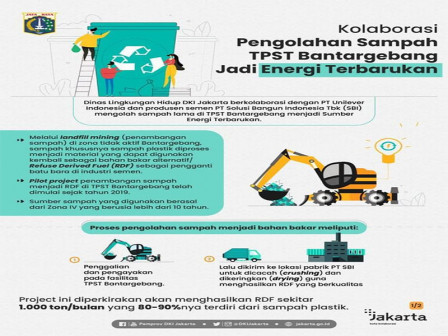 " It is estimated to produce around 1,000 tons of RDF per month"

He explained the waste would be used as material for alternative fuels or Refuse Derived Fuel (DRF) as a substitute for coal in the cement industry. The mining location was in a zone that was no longer active.

According to him, the processing waste into fuel included digging and tearing at the landfill facility. Then it was sent to the PT SBI factory to be chopped and dried to produce high quality RDF.

He added that RDF was used as a substitute for coal fuel for the production of the cement industry or power plants.

As for the information, the waste in Bantargebang are more than 50 million cubic meters and the delivery of waste reaches 7,800 tons per day.

"In future, we'll also collaborate with power generation companies in order to use this RDF alternative fuel. It aims to extend the life of the Bantargebang," he stated.