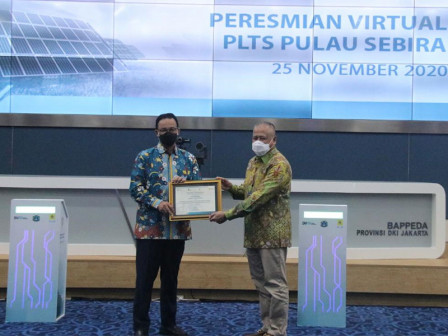 Jakarta Government is committed to bring social justice for all of its citizens. One of them is to provide facilities that are equal between people in main land and islands. This time, Jakarta Government collaborates with PLN Unit Induk Distribusi Jakarta Raya (UID Jaya) to launch Solar Power Plant (PLTS) on Sebira Island, Thousand Islands, Wednesday (11/25).

" Alhamdulillah, 600 families in Sebira Island will have electricity, which is not only safe but also environmentally friendly"

By using photovoltaics or solar panels since early March 2020 on 5,000 square meters area, PLTS hybrid PLN on Sebira Islands has power capacity of 400 kilo Watt peak (KWp) and projected to produce energy 1,200 kWh per day. This PLTS is equipped with battery capacity 912 kWh which functioned as energy storage thus electric energy can be used at night.

Jakarta Governor, Anies Baswedan expressed his appreciation and gratitude for the cooperation and consistency of program between Jakarta Government and PLN in Sebira Island PLTS which considered as a gift for Thousand Islands which has just turned 19 this year.

"I express my gratitude and appreciation agreement between Jakarta Government and PLN. Alhamdulillah, 600 families in Sebira Island will have electricity, which is not only safe but also environmentally friendly. This PLTS is a birthday gift for Thousand Islands that celebrated at the same time with PLTS inauguration," he said during online inauguration of Sebira Island PLTS at Pola Room, Jakarta City Hall, as quoted from Jakarta PPID Press.

According to him, PLTS in Sebira Island sends an important message not only for Jakarta citizens but for Indonesian people that if all facilities in archipelago in Jakarta can be fulfilled, then this spirit can also be realized to fulfill facilites in other archipelago areas in Indonesia.

"Why is this important in the context of Indonesia and Jakarta. One is connectivity (electricity). Jakarta consists of land and archipelago where Jakarta residents should have equal access to facilities provided by government. Our ability to provide connectivity in Thousand Islands sends a message that if the archipelago located closest to the center of power can be facilitated, then the distant ones, God willing, can also be facilitated," he asserted.

Furthermore, Anies explained that electricity connectivity that becomes responsibility of the state is one of important elements for inhabitants of archipelago to improve their standard of living, economy, and welfare. As with electricity, Sebira Island residents can use cold storage to keep their catches fresh, thus it can increase the selling value.

"We hope a stable electricity supply through PLTS can be the upstart to increase productivity of Thousand Islands people. They (residents) want cold storage thus they can store their catches and it needs electricity to realize it. Thus electricity will increase their standard of living, economy, and welfare," he stated.

Meanwhile, PLN UID Jaya General Manager, Doddy B. Pangaribuan mentioned, PLTS Sebira could increase the use of Green Energy from EBT (New and Renewable Energy) for electricity in Indonesia. It should be noted that PLN's target is to increase the use of EBT into 23% by 2025 and regionally this PLTS can be also used as backup power for existing Diesel Power Plant (PLTD) and save on existing fuel cost.

"It is the largest solar hybrid power plant in Jakarta. It will also be used to backup our PLTD thus it will reduce operating cost since it can reach Rp 3 billion only for fuel. While this PLTS can reduce the cost to Rp 1 billion," he explained.