Jakartans, Beware of Extreme Weather in a Week Ahead 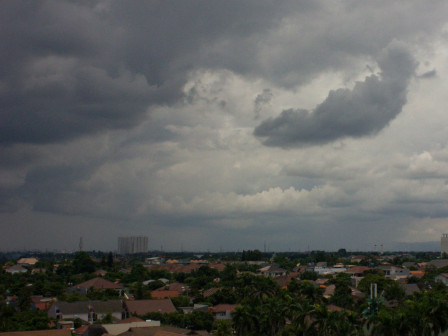 Meteorology Climatology and Geophysics Agency (BMKG) predicted extreme weather to occur in parts of Jakarta regions for a week ahead.

" We predict that in the next week, there is a potential for extreme weather and heavy rainfall to occur accompanied by lightning and strong winds"

Deputy for Meteorology Division, Guswanto mentioned, cyclonic circulation was monitored in Indian Ocean west of Aceh, in Indies west of Bengkulu, and in Karimata Strait which formed a convergence area that extends the waters in northern Aceh, from North Sumatera to waters in west Bengkulu and north side of Karimata Strait, and from Central Kalimantan to southern Karimata Strait.

"We predict that in the next week, there is a potential for extreme weather and heavy rainfall to occur accompanied by lightning and strong winds, one of which will occur in Jakarta," he explained in a written statement on Saturday (11/21).

According to him, this condition was reinforced by the active phenomenon of Madden Julian Oscillation (MJO), Equatorial Rossby waves, and Kelvin waves in Indonesia territory for a week ahead.

"The latest information can be accessed through a 24-hour weather information service via http://www.bmkg.go.id and social media @infoBMKG, and 'Info BMKG' application for iOS and android, or directly contact the nearest BMKG office," he said.