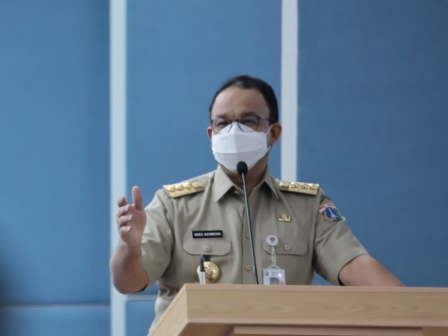 " We have decided to extend the transitional PSBB once again"

"We have decided to extend the transitional PSBB once again. Nevertheless the current condition is more controlled and towards the safe category. Remember, transmission still haunts us, eventhough it is slow. So please remain disciplined in particular 3M health protocols," said the Governor, Sunday (11/8).

"It can be seen that the increase in the accumulation of positive confirmed cases in Jakarta every two weeks shows a downward trend, namely 18.03% on September 26 - October 10, 14.57% on October 10 - 24 and 9.87% on October 24 - November 7. This means that transmission is still present in Jakarta but has slowed down every two weeks during the transitional PSBB. We really appreciate people who are disciplined," he explained.

"Based on that data, the demand in hospital beds for the patients in Jakarta has reached the ideal limit of 60 percent. That means, the city is ready if there will be a spike in cases and some of these cases must undergo treatment at the hospital. We will continue to increase the number of bed capacities, including intensifying massive testing and tracing activities and will be expanded throughout Jakarta," he explained.

- Physical distancing within the range of 60%

Previously, it had decreased significantly at the end of last October:

The percentage of community compliance for 3M should be at least 80% to be able to control the potential transmission of COVID-19. The city was about to continue to collaborate with Forkopimda officials in efforts to enforce the law on public health protocols in the capital.

The effective reproductive value (Rt), which is an indication of the level of transmission in the community, showed a score of 1.04 on November 7. This figure increased from a score of 1.03 on November 1, 2020. However, the results of the Rt score showed improvement compared to the data in October namely a score of 1.06 on October 12 and 1.05 on October 24.

Based on data analysis from the FKM UI team, the Rt value was then compared with the estimated new cases (onset) and the percentage of people who were at home (reduced mobility). The results show that:

- The estimate of new cases (onset) also showed a significant decrease in October, but increased slightly in early November.

In addition, the assessment based on the COVID-19 control indicator from FKM UI showed a four-point decrease from the score of 67 on November 1 to 63 on November 8. However, this score showed that the outbreak control in Jakarta was relatively stable compared to the score of 60 on October 16 and a score of 64 on October 24. The city would continue to strive thus various indicators of COVID-19 control continue to improve by enforcing the law and massive 3T activities.