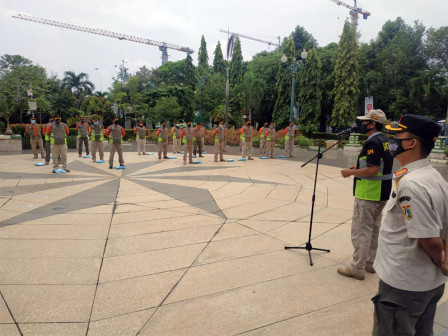 " Personnel are prepared to handle flood in this rainy season"

North Jakarta Satpol PP Head, Yusuf Majid conveyed, those 664 personnel were from city, sub-district, and urban village levels. Flood prevention was carried out by guarding SKPD personnel, such as PPSU, Water Resources (SDA), Bina Marga, and Environment (LH) Sub-agencies personnel in doing their tasks, as well as controlling traffic flow when rain subsides and mobilizing evacuees to a safer place.

"Personnel are prepared to handle flood in this rainy season since it is our job," he stated, Thursday (10/22).

"Satpol PP personnel at city level will regulate traffic flow on protocol roads, such as Jalan Yos Sudarso, and patrol based on recent situations on each areas," he said.

He instructed all personnel to carry out their duties optimally. They were also provided with raincoats which handed over symbolically through Section Heads and Satpol PP Commander in Sub-districts on Wednesday (10/21) afternoon.

"We will definitely do our tasks related to disaster management in North Jakarta as a form of our service to the community," he asserted.