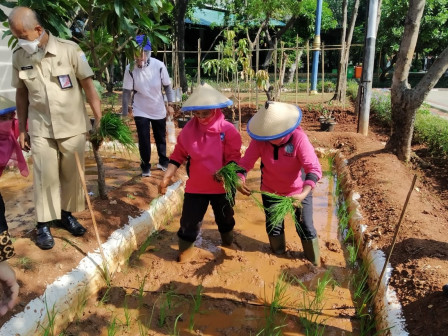 " If it is successful, then we can develop urban farming with more economical value"

North Jakarta KPKP Sub-agency Head, Unang Rustanto stated, this kemuning rice planting was divided into two areas of land. Each field has been plated with 60 seeds.

"It becomes a laboratory to learn about this agricultural system," he mentioned, Tuesday (10/20).

According to him, Minapadi agricultural system combines rice planting and fish breeding in one planting area. It takes about 120 days for rice to mature and be ready for harvest.

"In the same area, we also spread 100 tilapia fish fry. If it is successful, then we can develop urban farming with more economical value," he conveyed.

"Technically, we will collaborate with KPKP Sub-agency. Later on, it will not be only applied in RPTRAs, but also vacant lands that can be also used for urban farming," she closed.