Here is the Reason Why JIS Uses Hybrid Grass 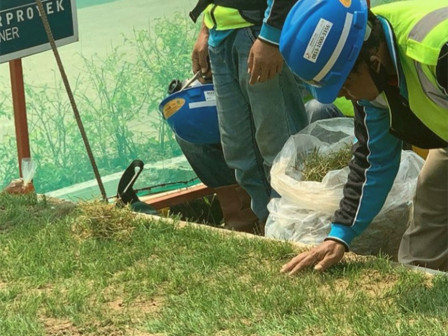 " Hybrid type is the future trend of football"

"First, hybrid grass has better water absorption. That means that the water will fall faster to the bottom layer of the grass. In terms of its use, it can be used twice international football matches in FIFA standards in one day," he expressed, Thursday (10/15).

It was also very suitable for coastal climatic conditions, which was a major consideration as JIS nearby from the north coast of Jakarta. Additionally it would be the trend of the modern football field in the future.

"Hybrid type is the future trend of football. Indonesia is only using JIS," he added.

On the other hand, the composition consisted of five percent using synthetic and 95 percent natural grass. Moreover the function of synthetic grass was to strengthen the structure of the grass.

"So later the grass won't fall off or sink. Full maintenance is the same as natural," he stated.

As for the information, JIS is not the only stadium that will use hybrid grass, as well-known stadiums in Europe such as the Allianz Arena Stadium owned by German giants Bayern Munich, the Wanda Metropolitano Stadium in Madrid, to the Tottenham Hotspur Stadium in London also use hybrid grass.