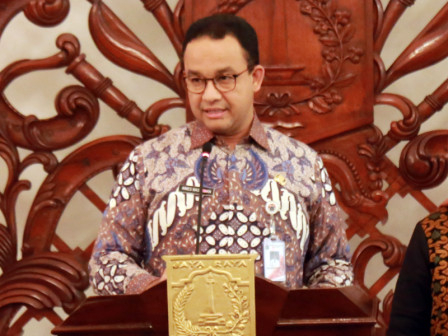 Based on monitoring and evaluation results from Jakarta Task Force in Accelerating COVID-19 Handling, it appears that there is a slowdown in the increase of positive and active cases, although there is still an increase in transmission.

Knowing this condition, Jakarta Government has decided to relax the emergency break policy gradually and enter the Transitional Large-Scale Social Restrictions (PSBB) with new provisions for the next two weeks, from October 12-25, 2020.

"Within this month, we applied emergency brake policy because there was an unexpected increase in COVID-19 cases. After stabilizing it, we began to reduce the brakes slowly and gradually. We need to emphasize that we mustn't let our guards down thus COVID-19 transmission remains under control and we don't need to apply emergency brake again," he conveyed as quoted from Jakarta PPID Press Release, Sunday (10/11).

Governor explained, additional positive cases and daily active cases became flat (stable) since strict PSBB was carried out from September 13, 2020. Some time later, there was an initial sign of decrease in daily positive cases in the last seven days.

Since government tightening PSBB regulations in Jakarta, the onset graphic shows reduction in number of daily cases, Rt rate, and virus reproduction. The onset graphic is graphic that shows positive case based on the onset of symptoms, not on the release of laboratory cases.

Based on data which compiled by FKM UI, the Rt's value for Jakarta at the beginning of September reached 1.14 and now it receded into 1.07. It means 100 people have the potential to transmit virus to 107 other people. Government, private parties, and communities should work together to break the chain of COVID-19 transmission by remaining disciplined in implementing health protocols during Transitional PSBB.

Furthermore, he also stated, in September 26-October 9, 2020 period, there was a decline again from previous 14 days, where number of positive cases increased by 22% or 15,437 positive cases. It showed an increase of 31% from the previous cases that reached 16,606 cases.

For active cases, it only increased by 3.81% or 492 cases, but compared to the previous number, it increased by 9.08 percent or 1,074 cases. From late September to early October, daily active cases began to flat consistently, indicating a slowdown in transmission.

Meanwhile, number of people who died in the last seven days due to COVID-19 reached 187 people, while in the previous week reached 295 people.

"After observing for the last two weeks, there is a decrease in death rate in confirmed cases of COVID-19. This decline has been seen from September 24, 2020, until now. The death rate or CFR in Jakarta has also continued to decline to the current 2.2%. Death rate has also decreased, prediction without strict PSBB is that the daily death rate of positive cases in Jakarta reaches 28 people a day, while the current rate is 18. However, death rate must be seen from absolute number and it should be suppressed as low as possible to zero," he asserted.

Population movement has decreased significantly since his side applied strict PSBB, especially in recreation areas, parks, and housing. While in markets, offices, factories, and public transports had decreased, but increased again in the past week.

In addition, there was a decrease in the proportion of case findings in office cluster in the past week. However, there was an increase in family/settlement cluster. It is important to comply with health protocols in home environment and strengthen RT/RW/Cadres.

As of October 10, capacity of COVID-19 isolation beds is filled by 66%. The decrease in the use of bed can be seen within previous weeks as follows:

Jakarta Government will continue to improve 3T for anticipating spike in cases. For information, number of people tested in Jakarta continue to increase along with the increasing testing capacity. In October 3-9 period, there were 63,474 people who took PCR tests, which equivalent to a testing rate of 6 per 1,000 population in a week (6 times the minimum rate set by WHO).

Assessment from FKM UI with indicators of Epidemiology, Public Health , and Health Facilities also showed improvement on October 4 with score 67 compared to September 13 with score 58.

Jakarta Government has coordinated with Central Government to re-implement Transitional PSBB with number of provisions that must be obeyed by all parties.

As mentioned earlier, that several sectors have been allowed to operate (details of sectors will be announced in advance). The new policy implemented in the current Transitional PSBB is to collect data on visitors and employees in opened sectors, using guest books (manuals) or technology applications that have collaborated with government to facilitate epidemiological analysis, especially contact tracing (close contact tracing) of positive cases. Information that must be available is name, mobile number, and ID number.

Thus Jakarta Government will carry out massive tracing activities during Transitional PSBB. On the other hand, government will continue to improve capacity for testing, isolation and treatment in hospitals.

He mentioned that every persons in charge should implement health protocols to prevent COVID-19. If a cluster is found (working together, interacting closely) in workplace, it is mandatory to close the workplace within 3x24 hours for disinfection. Every business is required to prepare 'COVID-19 Safety Plan'. Besides, there are specific protocols for each sectors which regulated  by the provisions of the relevant Agencies' Heads.

"All citizens are responsible for preventing COVID-19 transmission, If one place is not disciplined, the a whole city must suffer the consequences. So, we must be really disciplined in implementing 3M health protocols, and government will continue to improve 3T," he asserted.