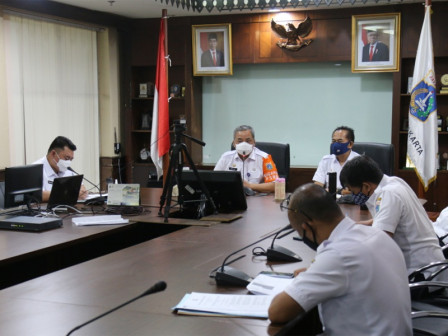 All officials in Central Jakarta Government were asked to improve its cooperation with residents to anticipate flood ahead of rainy season.

" Cooperation with residents regarding disaster management should be prioritized"

It was stated by Central Jakarta Mayor, Bayu Meghantara while leading the limited coordination meeting which held virtually at Mayor's Meeting Room, Wednesday (10/7).

"We must be better prepared. Cooperation with residents regarding disaster management should be prioritized," he asserted.

According to him, locations which flooded last year can be used as lessons for early anticipation.

He also expected the officials to prepare shelters for flood victims and socialize it to the residents. Thus when the flood occurs, residents know what to do.

"Put up banners or anything that can be used to inform shelter locations as well as its capacity and health protocols that should be implemented at the shelter," he conveyed.

Responding to this, Central Jakarta Government Assistant, Denny Ramdani mentioned, his side had instructed all urban village heads to find out residential areas which prone to inundation

"We have given format for the data, such as the flood height, causes, and action plans that should be prepared, and number of personnel on standby," he said.

"We also collaborate with Park and Urban Forest Sub-agency to prune trees near Dukuh Atas Underpass because its leaves can clog the stilling basin (kolam olak)," he stated.

In the other hand, Social Sub-agency Head, Apul Perangin-angin mentioned, his side has cooperated with civil apparatuses in urban villages and sub-districts, as well as community leaders to face the flood disaster.

"We encourage the communities to help distributing food which prepared by Taruna Siaga Bencana (Tagana)," he closed.