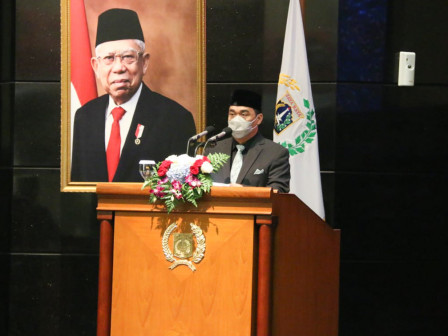 The Jakarta Provincial Government answers the views of the factions on the draft bylaw on handling COVID-19. These answers were conveyed by Jakarta Vice Governor Ahmad Riza Patria in the Plenary Meeting at City Council Building, Central Jakarta, on Wednesday (9/30) afternoon.

The city appreciates the questions, suggestions and important notes submitted by members of the Jakarta DPRD regarding the draft bylaw material presented. It is because there are many inputs and suggestions that are technical in nature and can be discussed in the council's legislation body (Bapemperda) meeting with the executive.

Some suggestions that are responded to, for instance, the coverage of the draft bylaw should focus on enforcing the health protocol in public spaces. "The draft bylaw has been adjusted to the objectives and needs of the government to overcome the disease comprehensively," said Vice Governor, as quoted by Jakarta PPID's press release.

He then expressed his appreciation and welcomed the suggestion for the involvement of the council members in monitoring the implementation of routine health protocols throughout Jakarta. He expressed, the city received suggestions and input on the need for additional rules in terms of making a level 3 Bio-Safety laboratory that was connected online to all sub-district levels in Jakarta, as well as Bio-Safety level 2, which was connected online at every level of the urban village in Jakarta.

"Thus the results can be used to optimize surveillance (testing, tracing, and treatment) to break the online-based transmission of COVID-19 using applications, such as JAKI," he added.

The surveillance implementation itself had been a concern of the city so far and had been accommodated as a form of protection for the health of its citizens to avoid a spike in cases. It was in line with efforts to provide facilities for controlled isolation and the provision of health services for patients affected by COVID-19, along with PCR tests in Jakarta, which comply with WHO standards every week.

"We also carry out close contact tracing with patients with confirmed status, providing psychosocial support for COVID-19 response officers, as well as provision of facilities and infrastructure for victims who died from the disease," he concluded.

He then conveyed the need for legal certainty for officials and citizens, regarding the imposition of sanctions thus not to have multiple interpretations in law enforcement in the field. He also encouraged cooperation in finalizing the considerations and harmonization between articles.

"In the aspect of law enforcement, we can explain that the imposition of sanctions prioritizes the administrative sanctions approach. As for the imposition of criminal sanctions for violators, which is carried out in accordance with the provisions of laws and regulations," he closed.