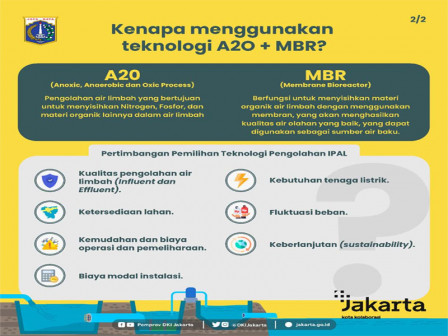 Juaini Yusuf, Head of Jakarta Water Resources Agency said the IPA could be used to increase access to wastewater services, improve environmental quality in surface water and ground water and become an alternative source of raw water as a source of clean water in the community.

"Water will be polluted if population growth and economic development in Jakarta are not supported by improvements to the domestic wastewater disposal system. Even, the improvement and development of a centralized wastewater management system can improve health and environmental quality. IPAL can also prevent waterborne disease caused by poor surface and groundwater quality," he expressed, as quoted by Jakarta PPID's press release, Friday (9/25).

He went on to say that the SPALD-T was capable of managing domestic wastewater in an urban/regional scope with a minimum service of 20,000 people. As for the coverage of communal SPALD-T services at settlement scale could manage domestic wastewater to serve 500 to 6,000 people for each SPALD-T built settlement. There was also a certain area scale that includes commercial areas and apartment areas.

It was compliance with PUPR Ministry Regulation number 4/2017 on the Domestic Wastewater Management System as a guideline for SPALD administrators to provide domestic wastewater management services to the entire community.

"We are also working with PD PAL Jaya to improve sanitation by treating domestic wastewater from the local system through the revitalization of the septic tank. The SPALD construction at the local system settlement scale will also continue to be carried out, especially in residential areas which are deemed to require proper sanitation access," he explained.

In the final stage, a disinfection process was executed to eliminate pathogenic organisms (which are harmful to health) and from this final result it was expected that the domestic wastewater quality standards had been established. If needed, further processing could be carried out to achieve better processed water for recycle.

As for the information, the time required for WWTP to carry out the biological treatment process is carried out continuously for 24 hours per day. To process wastewater, it takes a certain time from the start to the end. The estimated processing time is adjusted to the type of technology used and the target of its processing, for instance A2O technology (Anoxic, Anaerobic and Oxic Process), namely wastewater treatment, which aims to remove Nitrogen, Phosphorus and other organic matter in wastewater and MBR (Membrane Bioreactor) technology, which functions to remove organic matter from wastewater by using membrane technology which can produce good quality processed water and can be used as a source of raw water.

The total urban scale SPALD-T Development Zones planned through the Jakarta Sewerage System development program are 15 Zones with Zone 0 as the existing Zone (Setiabudi Reservoir) and 5 priority Zones (Zones 1, 2, 5, 6 and 8).

Here is a list of planned IPAL locations for 14 zones, the area of WWTP and their processing capacity: