Here are 11 Business Sectors Operating During PSBB in Jakarta 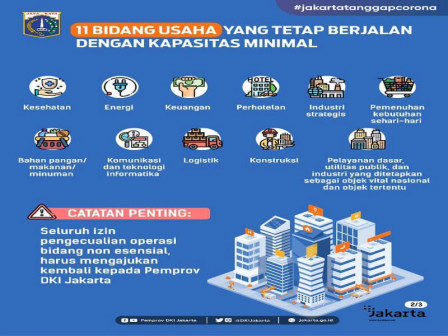 As reported earlier, the city administration had a plan to reimpose the large-scale social restrictions (PSBB) policy on Monday (9/14). It aimed of suppressing the increasing number of confirmed COVID-19 cases in Jakarta.

" Seeing this matter, we have no choice other than to pull the emergency brake, which is reimposing PSBB"

In a press conference that was held on Wednesday (9/9), Jakarta Governor Anies Baswedan explained the main indicators in this decision were the Case Fatality Rate and the Bed Occupancy Ratio for hospital beds in the isolation and ICU which was getting higher and showed that Jakarta was in an emergency condition.

"Seeing this matter, we have no choice other than to pull the emergency brake, which is reimposing PSBB," he expressed.

By doing so, he stated, non-essential workplaces would not operate and order its workers to work from home. That meant, there were only 11 essential business fields that could be kept running with minimal operations and could not be fully operational as usual with the imposition of restrictions on the number of employees.

Even, all additional operating permits for them that were obtained during the initial PSBB, either by the city administration or by the Industry Ministry was no longer valid and should be reevaluated if they feel they need to be exempted.

There were also food/snacks/beverages, communication and information technology, logistics, construction and basic services, public utilities and industries that were designated as national vital and certain objects.