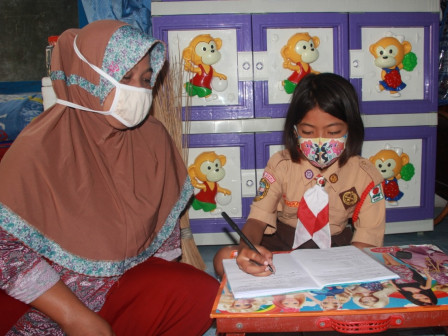 When JakWiFi was launched for all residents of Jakarta, this program immediately received positive reactions from many groups, especially the wider community in Thousand Islands.

One of them was Munawaroh, a resident of RT 07/03 Panggang Island Urban Village, North Thousand Islands. This 40-year-old woman who works as an honorary teacher admitted that she was greatly helped by the free internet network facility from the Jakarta Provincial Government.

All this time, she had to set aside her household expenses of Rp 500,000 to purchase internet quota for her three children. Her two children, who were in school at Islamic junior high school, Madrasah Tsanawiyah, really need internet quotas for distance learning, likewise with her eldest son who studied in Jakarta.

With her income as an honorary teacher and her husband who works as an inter-island motorcycle taxi driver, the Rp 500,000 budget to buy a quota had been a burden. Therefore, she was grateful for the JakWiFi program.

With JakWiFi, she furthered, her three children could now take part in the learning process from schools and colleges without having to bother buying internet quotas.

"Now my kids can access the internet from next to the urban village office. I can use the cost to buy a quota," she expressed.

In the meantime, Panggang Island Urban Village Head Pepen Kuswandi explained it could be accessible from the front and side of the urban village office, Tanjung Elang Berseri RPTRA and in the front of Pramuka Island RSUD. Eventually similar program would be expanded to other residential areas.

"Hopefully all residents, especially those with children, can access the internet for free and feel the benefits," he stated.