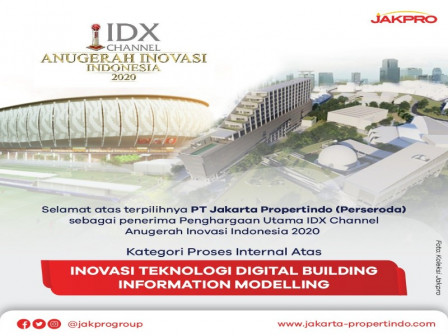 Another brilliant achievement was made by PT Jakarta Propertindo (Jakpro Perseroda) which won the main award of the IDX Channel Indonesian's Innovation Award (ICAII) in the category of internal processes for innovation in digital building information modeling technology.

The award was given after going through a series of judging stages, starting from the selection process, interviewing to a fairly rigorous assessment.

PT Jakpro President Director Dwi Wahyu Daryoto said ICAII is an annual prestigious award event in the Indonesian business world. It was organized by The Indonesia Stock Exchange Channel, which is the official television channel for the Indonesian capital market, targeting participants from BUMN, BUMD, private sector and listed companies that are successful in implementing innovation in their business.

"We're successful for two months with a rigorous selection and judging process, Jakpro's building information modeling technology competes with more than 50 other innovations. The virtual audience with the jury takes place on August 12 via Zoom Meeting," he expressed, Thursday (9/3).

Jakpro sent representatives of the Business Development Director Moh Hanief Arie Setianto and the Project Management Office (PMO) Team Hendri Saputra and Putri Pandora to present the implementation of digital technology and building information modeling in the construction of infrastructure megaprojects in Jakarta.

"Building information modeling is a technology adopted by PT Jakpro from an international project consultant from England, Mott MacDonald. This technology is based on 3D models that are able to create collaborative values in the construction project cycle through digital collection and management of information that aims to facilitate information access and streamline the duration of collaboration among project stakeholders," he said.

As for the significant impact of building information modeling technology on the progress of project development, the first is able to reduce costs by maximizing the calculation of material use thus it was not wasted. It is because stakeholders could identify potential losses due to errors early through clash detection reports.

Second, it is to become a Single Source of Information for project operations and maintenance (O&M), either while the project is still running or finished. All project stage data are neatly archived digitally thus they become a single source of information into a cloud system called the Common Data Environment (CDE).

Third, it was eco-friendly as project data that has been done manually and paper based has begun to be done digitally and cloud based thus to create a paperless and digitally oriented work culture.

"Jakpro is a pioneer in applying the building information modeling technology to O&M projects. The Jakarta International Stadium is the first project to implement this innovation followed by the Taman Ismail Marzuki revitalization project and the upcoming Phase II LRT project," he exclaimed.

The inclusion of building information modeling technology in this event is a form of Jakpro's seriousness in presenting its best innovation in the aspect of building a new face of Jakarta, whereby it is also an encouragement for the company to give its commitment.

"The goal is to spur both our management and Jakpro employees to be even better and to strive to maintain and improve our performance," he stated.