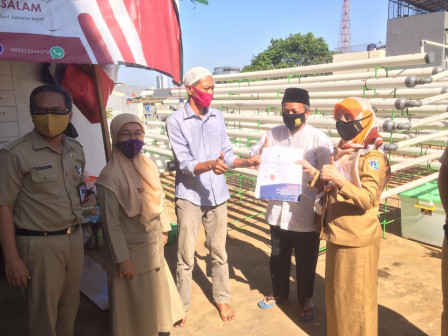 The Jakarta Maritime, Agriculture and Food Security (KPKP) Agency continues to develop urban farming by utilizing the vacant space in the rooftop.

" We can make it as a pilot material, socialization and expansion promotion"

Jakarta KPKP Agency's Agriculture Division Head Mujiati said urban farming in the mosque grounds had started to develop, but only a few make use of the space on the rooftop.

One of the pilot centers that use the rooftop was Baitussalam Mosque, Jalan Kesejahteraan, RW 08, Keagungan Urban Village, Taman Sari, West Jakarta.

"We can make it as a pilot material, socialization and expansion promotion," she expressed, Monday (8/31).

According to her, buildings that has empty or unused roofs can be used for productive activities, one of which is urban farming.

"This is our priority program, which aims to achieve food security," she told.

She added the agency is open to collaborating with anyone to develop urban farming. For the mosque, it will collaborate with the Indonesian Mosque Council in Jakarta area or branches in five regions.

"Together with the Religion Ministry, we also have plans for development in the pesantren (Islamic boarding schools). It is because, we want to meet the food needs of the students in the pesantren, they need to eat every day," she stated.