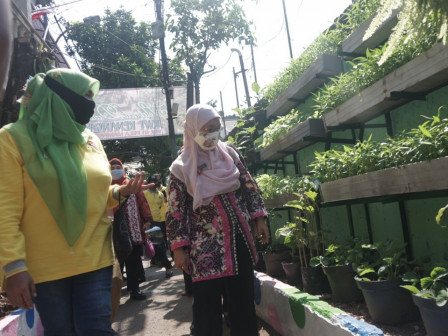 " Besides alley green, urban farming makes use of the top floor space of mosques and schools"

Jakarta KPKP Agency's Agriculture Division Head Mujiati said that one of them was in Kebon Baru Urban Village, Tebet. At this location, 14 out of 17 RWs had implemented urban farming driven by the Karang Taruna youth organization.

"Besides alley green, urban farming makes use of the top floor space of mosques and schools. Even the location has good potential and can touch the supermarket, there are residents who offer their 700 square meters of land to be processed," she expressed.

The next target was in RW 02 Bangka Urban Village, Mampang Prapatan. Its residents had mapped and studied market needs before carrying out agricultural activities.

She detailed the plants planted were basil, kale and arugula. Basil was sold at Rp 60,000 per kg, kale Rp 80,000 per kg and arugula Rp 120,000 per kg. These vegetables had been regularly supplied to two cafes.

"In a month, they need 100 kg to meet demand and has been continuous. They will provide education to other communities thus when there is a lot of demand they are not overwhelmed," she told.

The last location visited was Kenanga Women Farmers Group (KWT) in RW 01 Pela Mampang Urban Village, Mampang Prapatan. The location itself had character, as there were many preparations produced including Moringa meatballs and vegetable noodles.

"Besides planting, it is also used for families and local residents for consumption. Surely its existence must be added to increase production," she told.

"If the crop is abundant, the result is immediately entered into the treasury. It is sold between cadres and the community. We appreciate the presence of the government which provides guidance and direction, as well as assistance such as the procurement of seeds and toga," she closed.