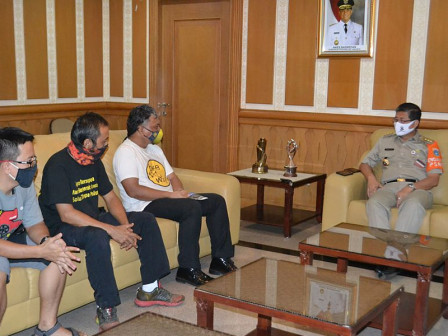 South Jakarta Mayor Marullah Matali, appreciated the role of the Bike to Work (B2W) community which promotes bicycle use in Jakarta lately.

"Besides reducing air pollution, bicycle use also encourages people to exercise," he expressed, after he welcomed a Bike to Work (B2W) community audience at the South Jakarta Mayor's Office, Monday (8/24).

According to him, their role was also in line with the city's program to build many bicycle tracks.

Before the disease broke out, his party had a plan to conduct a Tour de South Jakarta with a distance of 100 kilometers to introduce and educate the public about the importance of riding a bicycle.

"Each urban village already has at least one bicycle community," he told.

Bike to Work Indonesia Community Representative Julius uttered that the community was very supportive of the city in developing bicycle tracks. It was proof of the government's support for inviting the public to cycle.

"We invite the mayor and his staff to ride a bicycle together in the Bike to Work Community's 15th Anniversary," he concluded.