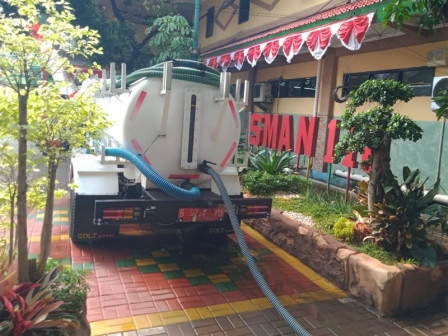 "We are targeting to desludge septic tanks in total 75 schools. It is a part of our education to the public about the importance of sewage treatment thus it will not pollute the environment," he conveyed, Tuesday (8/18).

According to him, schools that can participate in this program should have septic tank hole and the location can be reached by fecal suction truck. For this program, PD. PAL Jaya prepares budget Rp 24,750,000.

PD. PAL Jaya Desludging Service Unit Head, Hendry Sitohang added, currently 10 public schools have registered for this program and 6 of them have been desludged.

"Temporarily, this program is only targeting public school first. Later on , we will set target on private schools," he stated.

He informed, if there is a school that wants to desludge its septic tank, school side can follow PD PAL Jaya Instagram then send a direct message with hashtag #sedottangkisekolahgratisPDPalJaya #HUTRI75 or contact PD. PAL Jaya service hotline at 02183702136 or WhatsApp at 081290777020 or 081290777030 for scheduling.

"This program is valid from August 15 to August 31," he mentioned.