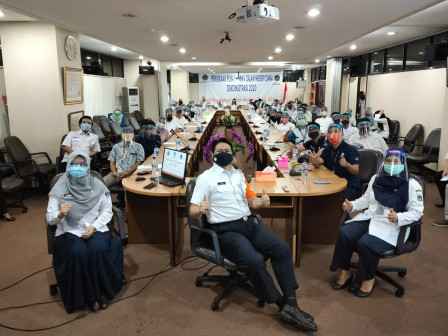 The Jakarta Manpower, Transmigration (Nakertrans) and Energy Agency has instructed 100 prospective workers in the 2020 Deconcentration Fund Domestic Apprenticeship Program for Vocational Office Administration and Restaurant Crew. Its apprenticeship will start from July 15 to December 14.

Of 100 trainees, 60 of them will take part in vocational restaurant crew and 40 others will participate in vocational office administration. They are planned to be placed in PT Transportation Jakarta (Transjakarta) and PT Palyja, as well as four private companies.

"This apprenticeship is to prepare themselves for the real world of work. Surely the good quality human resource skills and competencies will be able to suppress unemployment," expressed Jakarta Nakertrans and Energy Agency Head, Andri Yansyah, Thursday (7/16).

He explained it is a form of harmonious industrial relations between companies and jobseekers or prospective workers.

"This is a symbiosis of mutualism between companies and prospective workers. They want to improve their skills by directly practicing to the field or company. While the company, can get qualified workers and in accordance with the fields and tasks of the company," he explained.

He hoped that similar program could stimulate other companies to contribute in suppressing the unemployment rate, especially in Jakarta

"Hopefully this program will also absorb many apprenticeship graduates into employees," he hoped.

Training and Productivity Division Head Heny Mayawati explained that the program itself was intended for those who have a bachelor's degree, while the vocational crew restaurant had a high school/vocational certificate.

"Initially the number of registrants was 187 people through Google form. We called them to be interviewed and followed by a phase of selection," she explained.

He added every participant received an additional allowance from the government by Rp 1,000,000 every month. Then if they graduated, they would receive an apprenticeship pass certificate, which can be added to their portfolio when applying to other companies.