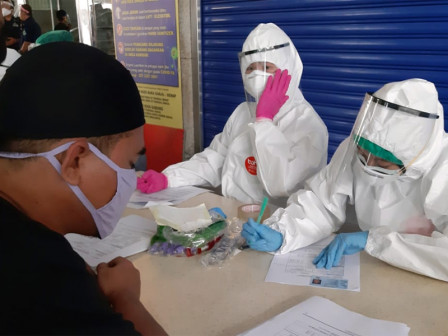 As many as 149 traders of Block A and B in Tanah Abang Market, Central Jakarta underwent rapid and swab tests held by the Tanah Abang Sub-district Puskesmas.

Tanah Abang Sub-district Head Yassin Pasaribu said 12 medical workers were deployed to support it. He detailed, as many as 77 out of 149 traders underwent rapid tests and 72 others underwent swab tests.

"The test results can be known in three until five days ahead. Of the 77 traders, 11 are reactive and directed to undergo swab tests," he expressed, Tuesday (6/23).

In this transition period, they were supposedly implementing the Healthy Clean Living Behavior (PHBS) and health protocols by wearing masks, gloves, washing hands with running water and soap, as well as maintain physical distancing.

"We have an odd-even system in every kiosk. So those who have odd number kiosks, enter on odd dates. It is done to curb the spread of coronavirus," he closed.