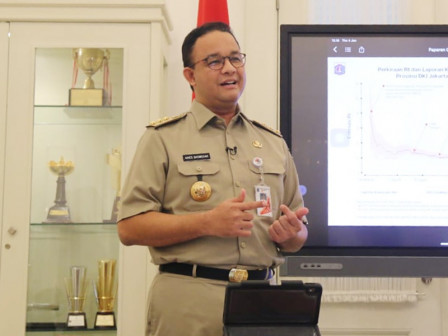 Jakarta Governor Anies Baswedan on Thursday (6/4) afternoon decided to extend the city's large-scale social restriction (PSBB) to the end of June as a transition period starting tomorrow in its fight against the COVID-19 outbreak.

" This transition is designed in phase I and II"

During transition period, the Jakarta Provincial Government would conduct a period of education and habituation of a healthy and safe lifestyle according to the COVID-19 protocol. Further, it would be continued with a period of restriction to the expansion of productive socio-economic activities.

"This transition is designed in phase I and II. Each phase is valid for one month and can be extended according to the results of monitoring of COVID-19 outbreak control conditions," he expressed, as quoted by Jakarta PPID's press release.

His party would also implement an emergency brake policy during transition period. It means, if there is an alarming level of transmission, all activities could be stopped and supervision would be re-implemented tightly.

At the same time, he explained the estimated effective reproduction number/Rt of COVID-19 in the capital area up to June 4 was 0.99 in according with scientific studies by the Faculty of Public Health, University of Indonesia.

"Last March, it was 4. We started to do restrictions, school closures, Car Free Day was stopped, work from home thus the number could drop significantly this March - April. This is the joint work of the whole community," he explained.

There were three indicators for easing social restrictions. The first is Epidemiology, the PDP trend in Jakarta, which fluctuates tends to increase, Positive Case Trends which fluctuate tend to drop and Death Trends always decline. For this indicator, the city got a score of 75.

Second, Public Health indicators, the PCR tests in Jakarta tend to increase, proportion at stay home in urban areas reached 50-70 percent. For this indicator, the score was 70.

As for the Health Facilities indicator, the number of ventilators and PPE in Jakarta had increased and had met the needs. The score was 100.

So, the total score of the three indicators was 76 thus social restrictions could begin to be loosened gradually while remaining alert to case surges.

"If it is seen from a positive daily case and the number of daily deaths as of June 3, Jakarta graphs are relatively down than the national and outside Jakarta. This effect was seen about 2-3 weeks later as the community carried out disciplined government policies in maintaining health protocols," he explained.

"That means we can change it. We managed to change the places that were red into green but we still have homework to change some other place to green," he added.

Considering the potential for transmission could still happen and there were still 66 RWs that are prone to transmitting COVID-19, which is why the PSBB was extended to end of June.

"All sanctions for PSBB violations will remain in force, like not wearing masks. So stay disciplined run health protocols," he asserted.

There were general principles and health protocols must be underlined and noticed during PSBB, as follows:

• Healthy residents are allowed to do activities outside the home

• Wash hands after returning from traveling, it is safer to shower

• Wear a mask at home if you or family are sick

• Private vehicles (motorcycle and car) operate with the health protocol

• Mass public vehicles (including terminal, bus stop, station) operate at only 50 percent capacity and the passenger queue is 1.5 meters between people

• Safe distance between people which is 1.5 meters

• Wash the activity site with disinfectant before and after each activity

• Employees who work in an office is 50 percent of all employees, 50 percent works from home

• Teaching and learning in schools is only done if the conditions are safe. Academic 2020/2021 begins July 13 but it has not been determined whether the learning activities can be held at school or still must be at home

• The decision to use PAUD, TK/RA/ BA, School/Madrasa for learning activities will consider the situation of the outbreak in Jakarta