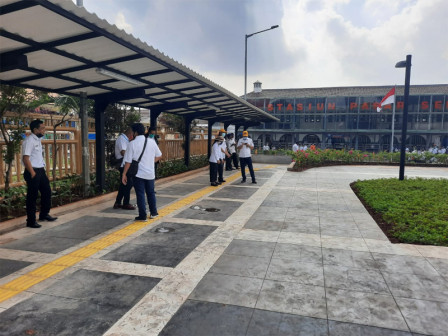 The Jakarta Provincial Government together with PT MRT Jakarta, PT KAI and PT Transjakarta began to conduct another arrangement trial of stations in the capital. This time, it is executed at Pasar Senen Railway Station, Central Jakarta.

" This pedestrian plaza emphasizes the safety, security and comfort of users of public transportation"

Jakarta Transportation Agency Head Syafrin Liputo said there were at least seven main activities that realize integration in the arrangement of Pasar Senen Station, namely Transjakarta bus stop on the north side, drop-off passengers area for online motorcycle taxi and bajaj on the south side, pedestrian plaza for the community from train to public minivan and vice versa.

"There was previously no integration. This pedestrian plaza emphasizes the safety, security and comfort of users of public transportation," he expressed, at Pasar Senen Station, Wednesday (6/3).

He stated his party would crack down on motorists who were still parked carelessly, as the drop-off passengers area had been available at the location.

In the meantime, Retno (39), one of public transportation users positively welcomed the arrangement trial that is able to make it easier for people to move from the train to the bus or vice versa.

"Now it gets better, access is faster, previously I had to walk to the north exit," he admitted.