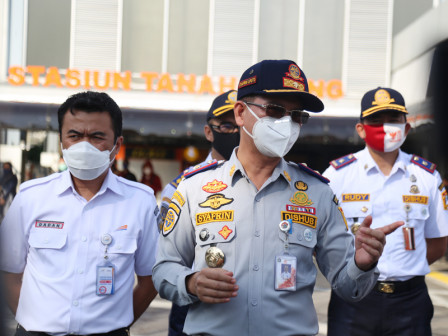 Jakarta Transportation Agency (Disbhub) together with PT KAI and PT KCI conducted a trial on the arrangement of Tanah Abang Station, Tuesday (6/2).

" In last January, we had a chance to sign in connection with the arrangement of four stations in Jakarta. Stations that have been approved are Juanda, Tanah Abang, Senen and Sudirman"

According to Syafrin Liputo, Head of Jakarta Dishub, it is a form of collaboration between the Jakarta Provincial Government and the Central Government in realizing integration in the station environment.

"In last January, we had a chance to sign in connection with the arrangement of four stations in Jakarta. Stations that have been approved are Juanda, Tanah Abang, Senen and Sudirman," he expressed.

The point of this station arrangement is full integration for the movement of people and vehicles to and from the station to other transportation. All stakeholders have carried out activities in accordance with the distribution of existing tasks.

This arrangement also regulates the pattern of passenger transportation by environmental transport such as bajaj and mikrolet.

"By doing so, we can parse traffic jam on arterial and local roads at the station, because of good intermodal integration," he told.

There will be an arrangement and supervision of the station's arrangement by the oversight task force under the Satpol PP Head's command, together with the Transportation Agency and the Central Jakarta Mayor.

"The trial will be carried out continuously, we’ll evaluate for the station arrangement team every Wednesday through a routine meeting and the future programs in this project," he uttered.

One of train users around Tanah Abangm Vini admitted there was a significant change at Tanah Abang Station and beyond her expectations. The station was more organized and neat, unlike before that seemed seedy.

"This is really a significant change compared to the last time I came to work. My friend was shocked when I uploaded the latest condition of the station on Instagram," she closed.