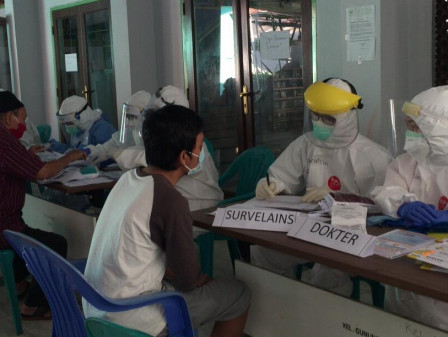 The Jakarta Health Agency (Dinkes) conducts a mass COVID-19 rapid test in villages and densely populated areas in 30 urban villages that have been ongoing since Monday until May 31. The test itself is targeting 200 citizens in each urban village.

Epidemiology and Immunization Surveillance Section Head Ngabila Salama said this rapid test is targeting elderly people, people who have close contact with positive patients, pregnant women, people with hypertension and diabetes mellitus, including potential positive teens but without symptoms with an age range of 20 to 40 years.

"We do blood sampling through veins in the elbow folds to get more accurate results. If someone has a cough and runny nose, we will take the swab test," she expressed, Wednesday (5/13).

However, if a resident is found with a positive rapid test, a swab will be conducted and will be referred to the athlete's guesthouse and the hospital that handle COVID-19. While waiting for referrals, these residents can be temporarily isolated at the shelter.

"Each regency ad city has prepared shelters such as in the sport halls (GOR) or other facilities as a isolation chamber for people without symptoms and people in monitoring with mild symptoms before the referral process," she explained.

Currently she explained there is a possibility of a shift in COVID-19 cases from initially high economic groups to low economic groups due to high cases in densely populated urban villages.

"The number of hospital visits is relatively declining, we worry that there are still many people without symptoms (OTG) with high mobility due to work reasons," she stressed.

She added the agency also sees hotspots or red zone areas, which are densely populated areas such as Kebon Kacang, Penjaringan, Pademangan Barat and several villages in Jakarta.

"This is our reason for conducting the mass test at the village or RW," she stated.