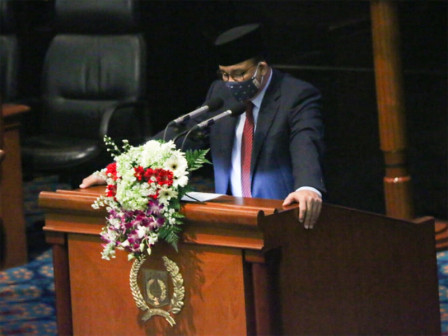 On that occasion, he outlined a summary of strategic development achievements and was contained in the 2019 budget's accountability report (LKPJ) document.

He explained that the human development index (IPM) in Jakarta last year was recorded at 80.76. It was higher compared to last year, which was 80.47 and was the highest IPM in Indonesia. As for social indicators, the number of poor people last year reached 362.300 people or 3.42 percent of the total population of Jakarta.

"In economic indicators, the gross regional domestic product (PDRB) at current prices last year has hit Rp 2,840.33 trillion. The amount increased by 9.27 percent compared to 2018 amounting to Rp 2,599.33 trillion. Last year, the city's economic grows by 5.89 percent. Then the inflation rate in Jakarta hits 3.23 percent or 0.04 percent or lower than last year, which was 3.27 percent," he expressed, as quoted by Jakarta PPID's press release.

He also explained the results of the implementation of priority programs according to the 5 missions in the 2017-2022 mid-term regional development plan (RPJMD):

1. Jakarta is a safe, healthy, smart, cultured city, by strengthening family values and providing creativity space through leadership that involves, mobilizing and humanizing, realized through the program as follows:

- Early childhood education center (PAUD) and community education program, in the form of the distribution of State PAUD education operational costs for 5,034 students and the procurement of 21 types of educational teaching aids (APE) to 1,752 institutions

- 12-year compulsory education program, in the form of school operational aids (BOS) for SDN/SDLBN, SMPN/SMPLBN, SMAN/SMALBN and SMK to 1,311,871 students and education operational costs (BOP) for SDN, SMPN, SMAN and SMKN for 925,997 students, as well as equality education program implementation package A, B and C at 39 state  learning and teaching centers (PKBM)

- Special education and special services program, in the form of BOP for SKLBN at levels of TK, SD, SMP and SMA for 1,700 students and increasing the competence of inclusive teachers for 300 people

- Educational facilities and infrastructure improvement program, in the form of school total rehab in 132 locations, heavy/medium rehab in 63 locations, 3 schools development and 4 classrooms development, as well as procurement of educational unit equipment for 285 schools

- Sports development and coaching program, in the form of folk sports festival at urban village until provincial level, sustainable achievement sports coaching for 1,200 athletes, as well as rehab and development of 234 sport facilities, comprising sport halls (GOR), buildings, fields and so forth

2. Jakarta is a city that promotes general welfare through the creation of employment, stability and affordability of basic needs, increased social justice, accelerated infrastructure development, ease of investment and business and improved spatial management, realized through the following programs:

- Entrepreneurship and UKM development program, in the form of coached location (Lokbin) in 6 locations, PKL's facility and infrastructure arrangement in 12 locations and entrepreneurship coaching for 40,000 people

- Poor handling program, in the form of collecting and processing poor data and social aid through provincial integrated database, as well as training in productive economic enterprises for poor families, attended by 1,260 people

- Traffic and transportation safety improvement program, in the form of the preparation of the Jakarta transportation master plan document and the implementation of public transport driver education and training for 2,000 participants

- Waste management program, in the form of B3 waste disposal site (TPS) development on Kebon Jeruk and Rawa Kerbo sub-districts

3. Jakarta is a place for the state apparatus to work, serve, serve, and solve various problems of the city and citizens, effectively, meritocratically and with integrity, realized through the following programs:

- ASN management, coaching and development program, in the form of CPNS recruitment with 33,771 participants until CPNS promotion with 2,303 people

4. Jakarta is a sustainable city, with development and living arrangements that strengthen environmental and social carrying capacity, realized through the program as follows:

- Forest management, parks and funeral program, in the form of land acquisition for green open space forests, parks and graveyards as wide as 21.35 hectares

- Landscape management program, the form of green open space development at 48 points, as well as revitalization of Puring Park and Mataram Park

5. Jakarta is dynamic capital as a node of Indonesia's progress characterized by justice, nationality and diversity, is realized through the following programs:

"Regarding the implementation of general government tasks, cooperation between the city and the regions/cities has been carried out, with details cooperation between the city with Bogor, Depok, Tangerang, Bekasi and Cianjur (Bodetabekjur), facilitated by the Greater Jakarta development cooperation agency; allocation of the financial aid expenditure budget by Rp 835.79 billion with the realization of Rp 827.62 billion or 99.02 percent for the Bodetabekjur regency/municipality government is aimed at integration, harmony and balance of transportation development, flood control and poverty," he uttered.

"What I say today is the essence of the LKPJ book which I have submitted previously. In addition, the development results that have been reported in the LKPJ book are a tangible manifestation of cooperation and strong commitment from all elements of Jakarta's development stakeholders and stakeholders, comprising local government, DPRD and citizen that always work together in a bid to realize the Jakartans' welfare. Therefore, the cooperation and synergy that have been created so far need to be maintained in the future," he closed.