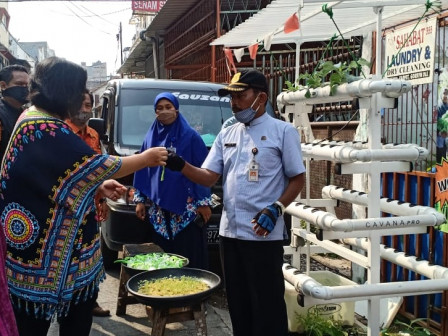 The West Jakarta Maritime, Agriculture and Food Security (KPKP) Sub-agency continues to monitor urban farming activities in residential areas amid COVID-19 outbreak via video conference, which aims to avoid the crowd and is in accordance with applicable health protocols.

" We do monitoring via video conference "

According to Jais Sartono, Executing Unit Head of Taman Sari Sub-district, urban farming activities such as Jumat Menanam (Friday Planting) have been ongoing since a month ago.

"We do monitoring via video conference that is directly done by the Secretary, Agriculture Division Head and Head of West Jakarta KPKP Sub-agency," he expressed, in RW 08, Keagungan, Taman Sari, Friday (5/8).

Veni, one of citizens in RT 02/08 Keagungan Urban Village who is a member of urban farming group said she has used hydroponic planting method since a month ago. Today, she planted 72 seeds of pakcoy, spinach and cesim, as they do not require a long time to be harvested.

"These vegetables in 21 days can be harvested and then will be sold to local residents," he stated.

Keagungan Urban Village Secretary Astrid Nursanti added her side thanked West Jakarta KPKP Sub-Agency for conducting coaching to residents. He hoped that it could be a routine agenda in improving the experience and education of citizens thus urban farming can be implemented in other areas.

"Hopefully it can also be conducted in other RWs. Thus residents can make planting media independently," she hoped.