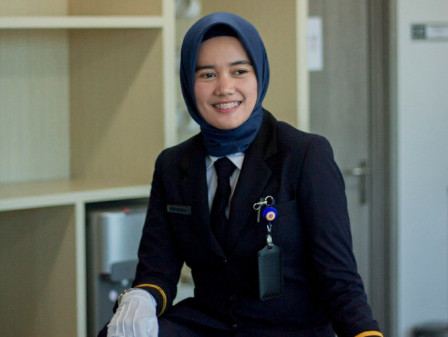 PT. MRT Jakarta (Perseroda) has number of female machinists who play an important role in operating MRT train. One of them is Dessy Anggraini, a 23-year old woman who has joined at PT. MRT Jakarta as a machinist since three years ago.

" Indonesian women should be enthusiastic"

To beritajakrata.id, she told the beginning of her career as PT. MRT's machinist in 2017. At that time, PT. MRT Jakarta recruited her from Indonesian Railways Polytechnic (PPI) which previously known as Indonesian Railroad Academy (API) Madiun. When entering the interview session, her side was offered by MRT Jakarta to be machinist.

"I felt challenged when I was offered to be a machinist. Now, there are 13 female machinists in MRT Jakarta," she conveyed, Tuesday (4/21).

She admitted that with her current profession as machinist of MRT Jakarta, she has an urge to show others that in modern era, Indonesian women are free to be what they want to be.

"Indonesian women should be enthusiastic, be productive, do whatever your heart desires but still in accordance with the norms prevailing in Indonesia. Believe me that even a woman with a soft heart can have a great desire to develop Indonesia," she said.

She admitted, there are ups and downs when she work as a machinist. Not only have many friends in here, but she also feels happy when she can take her passengers to their destination on time. But sometimes she feels lonely when she often unable to gather with her family, especially on holidays.

"But, I am proud to be one of MRT Jakarta's machinists, moreover PT. MRT Jakarta is the first company that recruit female machinist," she asserted.