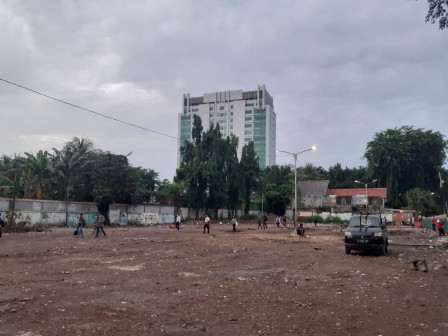 " In this project, we will ensure to provide drop-off and pick-up points in those stations"

For arrangement in Tanah Abang Station, he continued, his side ensures to make it more neat and arranged.

"PT. KAI is willingly to open the area. It will be used as transit area for passengers who want to continue their trip by using ride-hailing service, Transjakarta bus, microtrans, and other public transportation," he explained, Saturday (2/29).

Moreover, that location will be equipped with lay bay or waiting area for the passengers. According to him, this project will be handled by Perumda Pembangunan Sarana Jaya to build synergy between Regional-Owned Enterprises (BUMD)s.

For Senen Station, his side also plans to provide waiting area for passengers who want to continue their trip using other public transportations, build pedestrian plaza, provide bus stop and pedestrian crossing by merging the lands owned by PT. KAI and Jakarta Provincial Government.

Meanwhile, arrangement plan in Juanda Station is quite similar with arrangement in Tanah Abang Station and Senen Station. His side will provide drop-off point for passengers who use ride-hailing service (ojol) and basecamp for motorcycle taxi (opang).

"In Juanda Station, we will manage ojol and opang by providing base for them behind the station," he conveyed.

In Sudirman Station, his side will build police station, relocate the minimarket, install fence around the station area, build waiting area for passengers who want to continue taking other public transports, provide drop-off and pick-up points, and relocate street vendors (PKL)s.

Arrangement for those stations is still ongoing and will be tested in the beginning of March 2020.

"It will be carried out gradually. Hopefully we can operate those facilities in the beginning of March. In this project, we will ensure to provide drop-off and pick-up points in those stations," he said.

In the other hand, PPKUKM Department Head, Elizabeth Ratu Rante Allo informed, there are total 247 PKLs in Jatibaru Bengkel (near Tanah Abang Station). Her side has  chosen 149 PKLs randomly who will be relocated to the Tanah Abang Market Block F.

"We will ask additional stalls to Perumda Pasar Jaya for the remaining PKLs through Central Jakarta PPKUKM Sub-department Head. In Senen Station, there are only 9 PKLs around Senen GOR," she said.

Meanwhile, total PKLs in Juanda Station reached 32 people. Most of them sell foods using carts around the park. But they have been relocated.