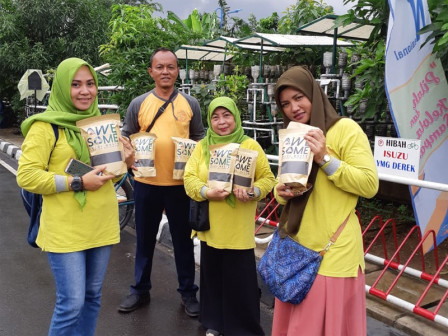 As an integrated tourist area manager, PT Pembangunan Jaya Ancol Corporate Communications Rika Lestari said Ancol always faces impacts arising from waste. However, the waste is not only thrown away but is instead used as compost.

She explained, since 2012, the company has been running an independent waste management program called Ancol Zero Waste.

The facility with an area of approximately 5,000 square meters is capable of processing waste with an average volume of 10 cubic meters every day. From that, zero waste processes organic waste into compost with an average production of 800 kg every month.

Then compost is mostly be reused for park maintenance and property in Ancol recreation area. Some are packed in small bags, which will be distributed to visitors as a form of education.

"Inorganic waste such as plastic waste, sorted according to the group and then tidied in a compacted way. After that, the results will then be distributed to the waste bank under the North Jakarta Environment Agency," she explained.

Some types of plastic such as beverage bottles are also used as decoration works such as those in Sea World Ancol.

The management has also implemented a ban on food packaging from styrofoam materials since 2008 and reduced plastic straws in all restaurants under Ancol management since last year.

"We also have a waste sorting program called Ancol Waste Sorting Movement (AWESOME). In addition to being done in all business units of the company, all visitors will also be invited to start sorting waste in their respective environments," she stated.