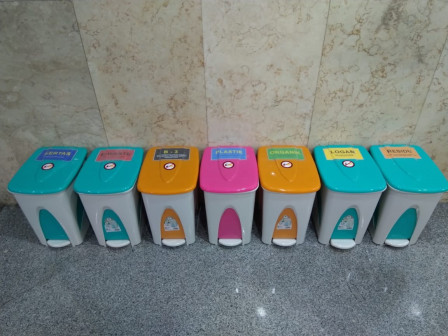 The General Bureau with the City and Environmental Management Bureau (PKLH) continues to intensify actions to reduce and sort waste in the Jakarta City Hall.

Jakarta General Bureau Head Budi Awalludin said it is done to follow up the Gubernatorial Instruction number 107/2019 on Reduction and Waste Sorting in the Jakarta City Hall.

"City Hall is the head office of the government in Jakarta. We must be able to become an example and reference for other government offices," he expressed, Sunday (2/16).

To run it optimally, there have been seven packages of sorting bins consisting of plastic, paper, B3, e-waste, organic, metal and pesticides.

"Together with PKLH Bureau, we place the sorting bins to make it easy for ASN, employees and guests to dispose of waste according to its categories," he explained.

"We also urge employees to bring tumbler from home," he told.

His side also urges bazar participants in City Hall area not to use single-used plastic bag anymore.

"We also conduct socialization and filtering thus the service for ordering goods, food, or drinks that enter Jakarta City Hall is no longer using plastic. We also plan to socialize it to the canteen manager at City Hall not to use disposable plastic," he said.

He added all cleaning services in the City Hall are also trained in the process of sorting waste. As planned, in the near future, a waste bank will be set up in the City Hall.

"If the waste bank has been operated, we will collaborate with Central Jakarta Environment Sub-agency. Thus cleaning services can get additional income from the sale of waste sorting," he stated.