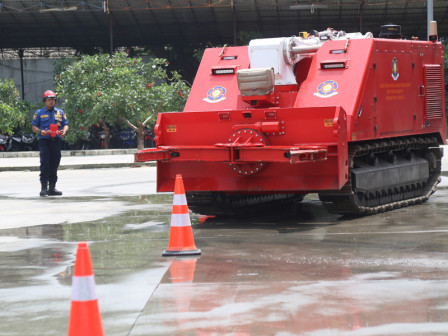 "DKI Jakarta is the only province in Indonesia that has Dok-Ink MVF-5 U3," he asserted after demonstrating Dok-Ink MVF-5 U3's abilities at Jakarta Gulkarmat Department Office, Gambir, Central Jakarta, Thursday (2/13).

Not only able to parse the fire materials, this robot has water tank with capacity of 2,500 liters water, 500 meters of foam, and nozzle. Besides, it is equipped with water pressure above 15 bar that is very effective in extinguishing fire.

According to him, this robot machine can be controlled using a remote control in radius of 500 meters. If fire containing dangerous or chemical and toxic materials, including concentrated smoke, personnel can deploy and control it from the control room.

"It allows firefighter to avoid the life-threatening risk of the job, such as fumes, toxic materials, or falling debris," he stated.

It can be operated to open up the way by shoving the materials and piles of debris as well as spraying the water to the closed hotspot.

"It also has explosion resistant ability while extinguishing fire. Thus unit still can be functioned and prevent significant engine overhauls. Surely it saves time and cost," he added.

Moreover, this unit is also equipped with gripper and load-pulling device with strength up to 8 tons. It is useful to evacuate heavy object from the fire location to a safer place.

"Robotic could be operated in an extreme location with angle up to 30 degrees. It has wheels consist of steel and rubber that can be adjusted on the needs. Normally, we use the rubber wheels thus it won't damage the asphalt," he mentioned.

Meanwhile, facilities and infrastructure in Jakarta are now improved, especially with MRT and LRT. For this reason, it becomes a challenge for Jakarta Gulkarmat Department to have capable equipment that can overcome fire hazards.

"United States and Malaysia have also used machine that can decompose fire materials. It is the answer for country or region who owns a capable fire handling facilities and equipment," he closed.