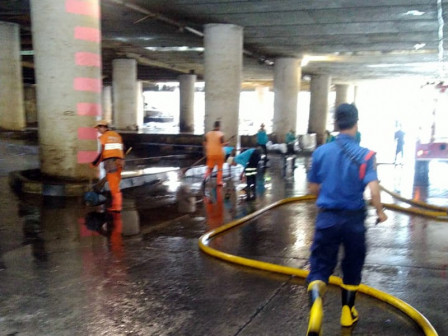 The Jakarta Fire and Rescue Agency has been assigned to soon handle flood that inundates the Gandhi Kemayoran Underpass, Central Jakarta after heavy rain poured Jakarta and its surrounding areas since Friday (2/7) night until Saturday (2/8) noon.

" Since 9.30 AM, underpass has been cleared of mud and can be passed again"

Fortunately, the condition now has returned to normal after firemen conducted suctioning on a 5-meter-high flood in a relatively short time on Monday (2/10). Until now they continue to clean up mud in the underpass thus it can be passed back by vehicle.

"Each pump has a capacity of 200-300 liters per second. Since 9.30 AM, underpass has been cleared of mud and can be passed again," he expressed, as quoted by Jakarta PPID's press release.

Jakarta Bina Marga Agency Head Hari Nugroho explained the Jakarta Provincial Government is going to cooperate with the central government, in this case the State Secretariat Ministry to make improvements to the Gandhi Kemayoran Underpass design as anticipatory stage.

"For now the problem can be resolved, despite the underpass repeatedly flooded again during high rainfall. We'll coordinate with the central government to do improvements. Our main attention is the public interest, instead of the debate over the ownership and management of assets," he stated.