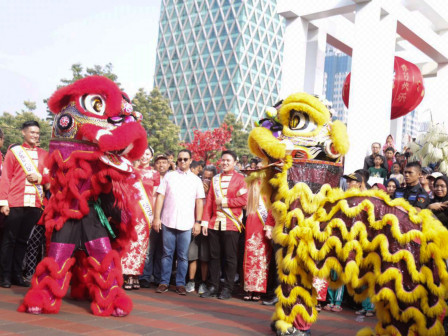 The Jakarta Governor Anies Baswedan, together with his staff under the Jakarta Provincial Government attended and witnessed the Barongsai (Lion Dance) Parade at Thamrin 10 Food and Creative Park, Central Jakarta, on Sunday (26/1) morning.

This activity was a series of activities of the 2020 Jakarta Imlekan in a bid to enliven the 2571 Imlek (Chinese New Year) celebration. The Barongsai Parade took place at the Car Free Day arena, starting from Thamrin 10 to the HI Roundabout.

In harmony with the meaning of the Lunar New Year, which is the spirit of unity, the Jakarta Provincial Government supported the implementation of a variety of entertainment, parades and distinctive ornaments of the Bamboo Curtain Country in some corners of the city, as well as a form of cultural acculturation in Jakarta.

As stated by the governor, the Barongsai Parade was a part of an effort to revive the festival in accordance with the culture and traditions that will be more routine and expand the scope of its implementation going forward in Jakarta.

"Our goal is to enliven the festival in accordance with its culture and tradition. So, this year, we start with the commemoration of the Hijri celebration, there is the Muharram festival and Jakarta Imlekan. It would be a routine agenda and will be wider," he expressed, as quoted by Jakarta PPID's press release.

Baswedan went on to say that it was the result of collaboration between the city government and several communities, schools and Jakartans. "This is all done collaboratively, not only the government but also the government with elements of society. Our role is to prepare general facilities and the community activities, like we do today such as Barongsai Parade from a few days ago until this morning in the Thamrin and HI Roundabout areas," he explained.

At the same time, he also greeted the visitors warmly in the Thamrin 10 Food and Creative Park area. His party would be more active in holding events in Thamrin 10.

"In Thamrin 10 this is a city land that is converted into a culinary center, a center for cultural arts activities, which from time to time are based on different events. We've started it since last December, and now it has become a place for Jakarta Imlekan's activities," he added.

As for the information, the lively celebration of the Jakarta Imlekan began on January 15 - February 9. Here is a series of activities in welcoming the Imlek celebration, as follows:

2. Barongsai Parade, Tanjidor and Gambang Kromong in the front of Grand Hyatt and Taman Dukuh Atas at 5 PM to 7 PM (January 23 - 24)