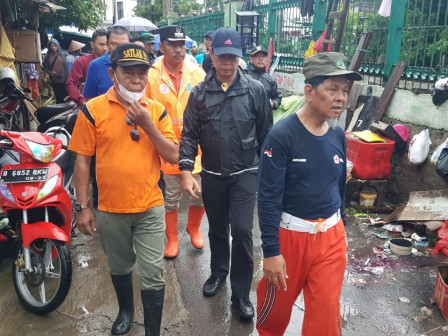 " We do it simultaneously in six of eight sub-districts"

This action began with a joint ceremony led by West Jakarta Mayor Rustam Effendi on Jalan Raya Panjang, precisely in front of the Green Garden Housing entrance. Afterwards, hundreds of officers went to the settlements in RT 03, 04, 07 and 08/RW 04 stricken by flooding.

He stated that most of the settlements in the six sub-districts have receded. The remaining two locations are still inundated, namely Semanan, Kalideres and Kapuk Urban Village, Cengkareng.

"Similar action would also be done in other sub-districts on the next several days ahead," he told.

Aside that, health posts in a number of flood locations remained open for the next few days to provide health services for flood victims.

"Don't worry our medics are on standby for 24 hours," he closed.