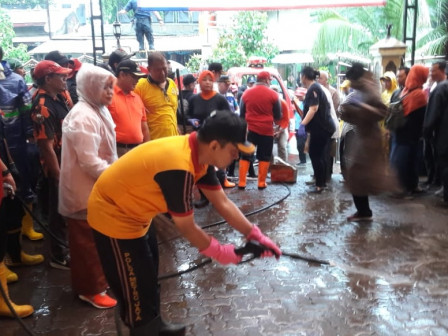 Around 500 joint personnel of North Jakarta administration, police, army and representatives of community organizations are conducting a clean-up activity and spraying disinfectant liquid in the neighbourhoods of RW 03, Pegangsaan Dua Urban Village, Kelapa Gading, on Sunday (1/5).

"On January 1, the flood height reached one meter in this residential area "

"On January 1, the flood height reached one meter in this residential area. That's why we do this activity," stated North Jakarta Mayor Sigit Wijatmoko.

Similar activity is also spotted in RW 03, Pegangsaan Dua Urban Village or precisely in four sub-districts that are stricken by flooding. They are Kelapa Gading, Koja, Cilincing and Penjaringan.

In all flooded locations on January 1, he made sure there were no puddles, except Pejagalan area in RW 12 and 13.

"It was raining earlier so we can make sure the waterways are under control," he stated.