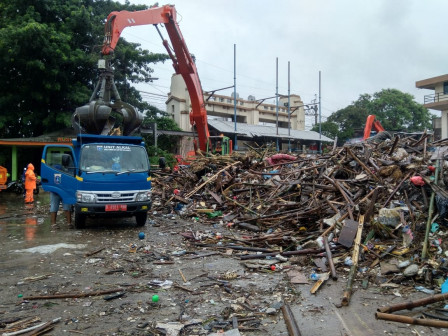 A lot of garbage was swept away in Manggarai Sluice Gate, Jalan Tambak, Mentent, Central Jakarta, due to increasing volume of water on Ciliwung River.

Jakarta Environment (LH) Department's Water Body Unit handles it by collecting the garbage immediately. Until 9 AM, garbage that has been collected reaches 40 cubic meters.

LH Department's Water Body Unit Head, Rohmat stated, his side has optimized his personnel to pick up the garbage on the sluice gate since 3 AM.

There are 5 personnel deployed to collect the garbage on Manggarai Sluice Gate.

"We also use 3 excavators to accelerate collecting the garbage from the water. Maybe we will add more excavator or personnel if needed based on the situation on the field," he added.

"I hope citizens can cooperate with us to maintain the cleanliness, especially for not littering on the water body, both micro and macro channels," he stated.