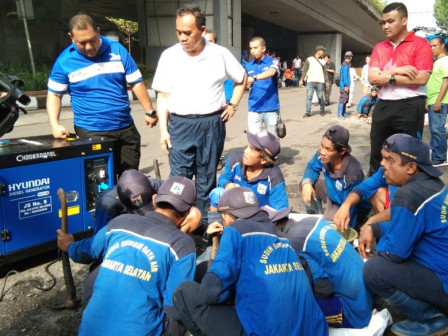 "We do this to minimize flooding on protocol roads when it rains," he expressed.

It was done simultaneously in five cities, especially in crowded areas, strategic areas of government and flood-prone locations.

Jakarta Water Resources Agency Head Juaini Yusuf expressed that the synergy between regional apparatus organizations (OPD) to the community was important to jointly overcome the inundation and flooding.

"Alhamdulillah we really appreciate related units that have supported and are willing to collaborate in efforts to handle flooding," he told.

He added that this communal work was focused on 19 spots and would be conducted up to March 2020.

"Therefore we will try to realize the city with zero flooding," he explained.

The agency would work massively, including by deploying 5,000 personnel with the support of equipment and fleets.

"All are on standby and responsive. We optimize the handling before flood occurs," he stated.