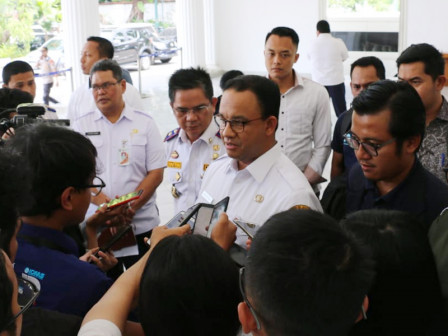 Jakarta Governor Anies Baswedan, welcomed the protesters consisting of public minivan drivers from North Jakarta on the courtyard of the Jakarta City Hall's Pendopo, on Wednesday (11/27).

" We want to say that this program is very touching for the community, until the alleys get free services on time and it is indeed very supportive"

They demanded that the Jakarta Provincial Government to continue and expand the integrated public transportation, known as Jak Lingko until North Jakarta.

North Jakarta Wahana Kalpika KWK Cooperative Chairman Ramli, who is the representative of the protesters, expressed his first appreciation for the successful Jak Lingko program in the capital.

"We want to say that this program is very touching for the community, until the alleys get free services on time and it is indeed very supportive," he expressed, as quoted by the Jakarta PPID's press release.

It must continue to be supported by the expansion of the route, as well as the addition and rejuvenation of the fleet in the next year which is able to reach more people to access public transportation, especially in North Jakarta.

"Now there are six routes in North Jakarta with 193 fleets. Its people very need free public transportation but it is limited," he explained.

Responding on this matter, the governor was pleased that the program was in demand not only by public transport users but also operators and providers of public transportation services.

"Because of that, they want to join, why? Because they feel benefited, also the public. So, this is an example of how integration is not just an aspect of transportation, but the business model is a business model that benefits operators," he explained.

The city will continue to commit to integrating public transportation in Jakarta. He also hoped that there would be reciprocity from the operators in rejuvenating their transportation, which aims to provide maximum service.

"I hope they (operators) can take good care of vehicles, update vehicles regularly, service quality is good, as they are in a mutually beneficial system. I'm happy and hopefully this can be realized. Some can't yet be included in 2019 due to lack of budget, but InsyaAllah, we do it in 2020," he stressed.