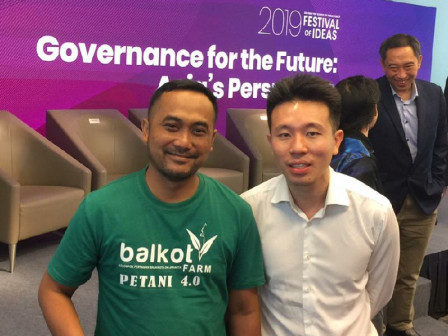 The Balkot Farm as Urban Farming 4.0 by utilizing limited land in the office area was promoted at the Festival of Idea in the Lee Kuan Yew campus of the School of Public Policy (LKYSPP), National University of Singapore.

In the activity that took place on November 20-23, the theme was "Governance of future Asia’s Perspective".

"We represent our friends who play an active role in the ideas to develop a city, especially in terms of urban agriculture or urban farming," he expressed, Sunday (11/24).

It was developed on the basis of cooperation between the Kominfotik Agency, the KPKP Agency, the City Secretariat General Bureau, PT Bank DKI and the Health Agency.

"We collaborate to be a reference for urban development, both in government and private offices," he explained.

It became a manifestation of efforts to improve the economy of the people who are connected with the world of local business and international networks.

"It also carries the theme of collaboration with the community to manage and produce urban agricultural products," he told.

Besides the city hall, the concept of Urban Farming 4.0 was also realized at the South Jakarta Mayor's Office.

"Hopefully it can also be realized in other mayor offices," he hoped.

Then the Governor's Team for Accelerated Development (TGUPP) Representative IDhan Alfisyahrin expressed that this international scale event was very interesting to follow. Besides being able to introduce Jakarta's ideas to the world, Jakarta could also exchange the latest experiences and information with other cities in the world.

"Some things that can also be learned in this festival are the development of public aspirations, community security management and others in developed countries that might be adopted by Jakarta going forward," he stated.