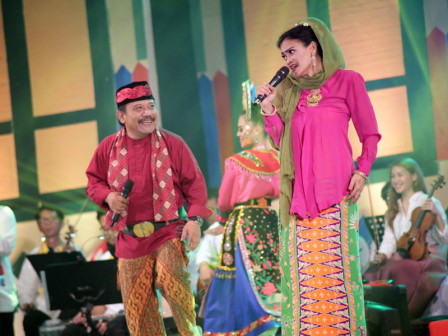 There was an event called Pentas Pesona Budaya Betawi untuk Indonesia or Performance of Betawi Culture Charm for Indonesia that held at Jakarta City Hall to enchant visitors.

" There is special performance from the son of Benyamin Sueb, Beno Benyamin"

It was enlivened with music orchestra led by Indro Hardjodikoro that play songs popularized by Benyamin Sueb and Sirih Kuning dance that performed by the expatriates.

Besides, there was also Gambang Kromong and martial art performance from Sanggar Si Pitung.

"There is special performance from the son of Benyamin Sueb, Beno Benyamin. He sings the song that popularized by his father," he mentioned, Friday (11/15) night.

According to him, this is the second time this event has been held. Jakarta Government through Disparbud fully supports this event which is initiated by Benyamin Sueb Foundation.

"I think there are many positive things from this event. Moreover, Betawi artists also have a space to express their creativity," he asserted.

Besides, this event also involves expatriates in Jakarta in order to promote Betawi cultures and arts to the world.

"We want to increase number of foreign tourist visits to Jakarta. In the future, we hope we can have more similar events, even in urban village area," he conveyed.