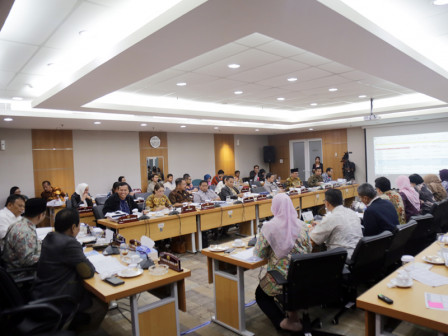 " We think this is important for infrastructure development"

Commission B Chairperson, Abdul Azis stated, one of KPKP's plans with that additional budget is to manage harbor in Tidung Island, Thousand Islands, as information center.

"We think this is important for infrastructure development. Besides, there are several programs that can give direct benefits to citizens," he added, Jakarta DPRD Building, Jalan Kebon Sirih, Central Jakarta, Thursday (10/31) night.

Meanwhile, KPKP Department Head, Darjamuni responded positively to the additional budget since it will be used to optimize service to the community.

"Information center harbor construction in Tidung Island is interesting because it is build as the conservation center thus harbor have its own icon and charms," he explained.

According to him, Commission B also give constructive inputs regarding fishermen needs in north coast of Jakarta.

"We also pay great attention for fishermen's convenience and welfare," he added.

Here are KPKP's priority programs in 2020: food security, urban farming, ecological rehabilitation and conservation in Thousand Islands, RPHU revitalization, and relocation for poultry shippers and slaughters in market and settlement.

"As our priority program next year, we will also improve the capacity of Muara Angke fishery port management, and integrated entrepreneurship education in fishery, agriculture, and animal husbandry," he stated.