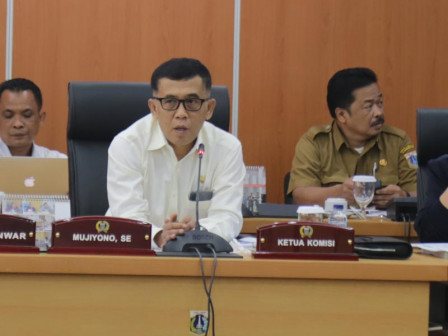 The Jakarta Legislative Council (DPRD), opened a meeting to deeply discuss the recapitulation of the proposed Jakarta Inspectorate activity budget on the 2020 budget priorities and preliminary threshold (KUA-PPAS), on Tuesday (10/29).

" I see this Inspectorate getting professional"

The Commission A Chairperson Mujiyono paid great attention and hopes to the performance of the Jakarta Inspectorate.

"I see this Inspectorate getting professional. Mr. Michael (Head of Jakarta Inspectorate) was there to spearhead far better performance, that's why we get an unqualified opinion (WTP)," he expressed, after leading the meeting at Jakarta Council Building.

He went to say that the combination of reliable human resources with a good technology-based system could support the Inspectorate's performance in the duty of oversight going forward.

"Look for a reliable auditor, so not only quantity, but quality as well. Then is the system, the reporting stage is clear, where it is repaired before it becomes a legal matter, before it reaches the party, the BPK and the third party," he explained.

Jakarta Inspectorate Head Michael Rolandi Cesna Brata explained, for provincial governments with a budget of over Rp 4 trillion, 0.9 percent would be injected for regional monitoring.

It was compliance with the Home Ministry number 33/2019 on Guidelines for the Preparation of the 2020 APBD and Circular Letter for the Inspectorate.

"If City's budget is between Rp 84 trillion up to Rp 87 trillion, we have to inject Rp 250 billion up to 260 billion. We want it to be just as needed, the most important thing is the work mandated to the inspectorate can run well," he told.

He is optimistic that can optimize the Inspectorate's work with a budget proposal of Rp 135 billion or 0.16 percent of the budget with increased capacity through education training (diklat) and certification for auditors with a period of 120 hours per person per year.

The current number of Inspectorate employees is 253. They would add 144 personnel through CPNS selection.

"We can fulfill it. We have calculated the value of around Rp 135 billion, which means that it can only be 0.16 percent," he explained.

"We have an IT-based tax system. So, we can do a study through the database that we have," he stated.