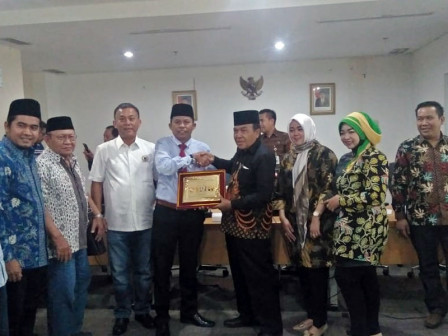 In the visit, they wanted to consult regarding the formation of board fittings (AKD), synchronization of the council's conduct of code (tatib), procedure, as well as division of tasks and coordination from Jakarta DPRD.

Samarinda City DPRD's Commission I Chairman Joha Fajal said the kunker acted to align the tatib with the formation of the AKD.

"Tatib is very important, which is part of what we have to do. Despite we actually did the discussion, we still want to study to them," he expressed, at Jakarta Council Building, Jalan Kebon Sirih, Gambir, Central Jakarta.

There were many important points. One of them was the principle of flexibility in the preparation of the tatib and quorum mechanism as proof of approval on the decisions agreed upon by each faction.

"It means we will look at the instrument, thus the rules that we make do not exceed the capacity of the applicable law," he told.

Jakarta DPRD Vice Chairman Mohamad Taufik uttered formulation of articles contained in tatib needs to be done flexibly and in accordance with the local content needs of each region.

All legislators have the right to adjust their substance as long as it is still in line with Government Regulation No. 12/2018 on Guidelines for the Arrangement of Tatib for Regency, Province and City.

Then the council member Hasan Basri Umar added its formulation is based on consensus agreement with the proportional principle.

"When we meet them (DPRD), we talk about togetherness, instead of about faction," he closed.