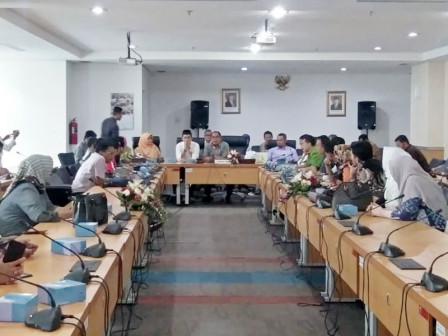 In this work visit, those councilors are expected to learn about Jakarta DPRD's discussion mechanism of Standing Orders and Procedures for Honorary Board (BK).

Pekanbaru DPRD Chairperson, Hamdani stated, his side is still performing Standing Orders carried out by DPRD in previous period.

"We want to adjust with the new Standing Orders for 2019-2024 period and learn about Procedures for Honorary Board. Result from this comparative study will be applied later, including the adjustment of local wisdom in each regions," he conveyed.

According to him, his side received many inputs from Jakarta DPRD that can be considered to compile Standing Orders such as flexibility principle thus later this Standing Orders will not hamper DPRD members.

"Those inputs can be reviewed while compiling Standing Orders and Procedures for BK that will be used in five years," he mentioned.

"These Standing Orders should be put in order since it is frame for work. Although there will be no revision, but it shouldn't hamper councilor activities such as work visit to other regions or abroad. Since it can't be assumed that councilor is not work if councilor is not in the office," he explained.