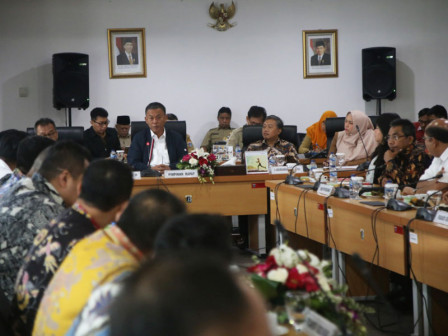 " We target to finish the AKD on October 21"

Jakarta DPRD Chairman Prasetio Edi Marsudi stated each faction to immediately submit the names of its members to fill the AKD.

"All names must have been submitted tomorrow. We have also agreed on the division of members, it's all proportional," he stated, at Jakarta DPRD Building, Jalan Kebon Sirih, Gambir, Central Jakarta.

The AKD in question is the chairman, vice chairman, as well as members for the house's consultative body (Bamus), the budget committee (Banggar), the council's legislation body (Bapemperda), the honorary agency and the commission.

"It refers to Government Regulation number 12/2018 on guidelines for the arrangement of DPRD's provincial, regency and City rules," he explained.

Especially for the composition of Bamus and Banggar is half of the total council members. It has been regulated in the regulation number 12/2018 in Paragraph 45 and Article 53.

"For instance, PDIP has 25 people, meaning 12 must be members of Bamus and Banggar with a record of rounding down. This is because if the rounding up is done, the number exceeds the regulations," he told.

To fill Bapemperda post, according to article 51, there will be only 21 selected people comprising nine factions. As for the honorary board members, each faction only needs one member in accordance with Article 55 Paragraph 4.

"Talk about the election of the chairperson and its partner will be chosen by its members," he told.

Then the committee needs 20 people. As for each commission in the council, they are Commission A for Government, Commission B for Economy, Commission C for Finance, Commission D for Development and Commission E for People's Welfare.

"We target to finish the AKD on October 21," he closed.