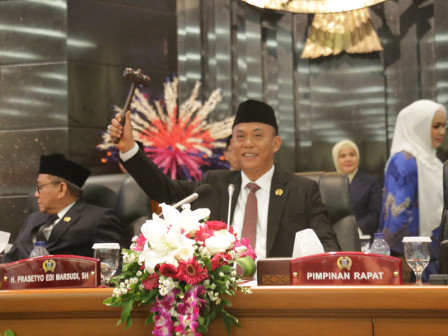 Prasetio Edi Marsudi, officially served as Chairman of the Jakarta Legislative Council (DPRD) for the period 2019-2024, on Monday (10/14). This is the second time he served with the same post.

" I will carry out the mandate assigned to me"

The inaugural procession was carried out through the Plenary Session/Oath Pledge Meeting of the Jakarta DPRD Definitive Chairperson based on the Home Ministry's Decree No. 161.31-5344/2019 dated on October 8 about the Inauguration of the Appointment of the Jakarta DPRD Leader.

"I will carry out the mandate assigned to me," expressed Marsudi or popularly called Pras, at Jakarta Council Building, Jalan Kebon Sirih, Gambir, Central Jakarta, Monday (10/14).

In the period 2019-2024, he would give the new breakthroughs, one of which is to present the Join Clue application which would accommodate the community's information and aspirations regarding performance of DPRD and discussion of City Budgetr (APBD).

"We want the development of Jakarta to be better and increasingly provide benefits to citizens," he explained.

He went to say that there were some things that would be prioritized in the discussion of the 2020 APBD, such as village arrangement, flooding, traffic jam and transportation integrated modes development such as LRT and MRT.

"There are priorities that we must resolve, including settlement efforts that need to involve areas around Jakarta," he exclaimed.

After the inauguration, he added there were tasks waiting for him, like to form the Board Fittings and to discuss the 2020 KUA-PPAS.

"I express my appreciation and thanks to the temporary DPRD leader while carrying out his duties. Thank you also to the Governor," he stated.