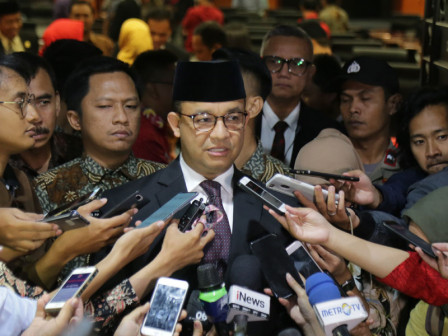 Jakarta Governor Anies Baswedan, congratulated the leadership of the Jakarta Legislative Council (DPRD) period 2019-2024, which was announced officially through the plenary meeting, on Thursday (10/3).

" I congratulate the five people who get the mandate to be the council leader,"

"I congratulate the five people who get the mandate to be the council leader," Anies expressed, after he attended in a plenary meeting at the City Council Building, Kebon Sirih, Central Jakarta.

He hoped the partnership with them could continue to be established and run well, considering there are agendas that involve the executive and the legislature.

"Including several draft bylaws that need to be discussed," he stressed.

As for the information, the definitive leader announced yesterday is Prasetio Edi Marsudi from PDIP Party to become Chairman of Jakarta DPRD for the second time. While for the position of the DPRD vice chairmen is served by Mohamad Taufik from Gerindra Party, Abdurrahman Suhaimi from PKS Party, Misan Samsuri from Democratic Party and Zita Anjani from PAN Party.